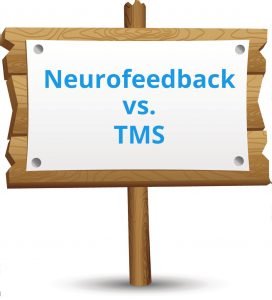 We get a lot of questions these days about TMS (transcranial magnetic stimulation). These two technologies can seem similar enough that identifying the differences can be confusing.

Below are common questions we hope will help you become more thoroughly informed:

Are TMS and neurofeedback the same or similar?

No. TMS and neurofeedback are completely different methods employed to change brain activity.

How are TMS and neurofeedback different?

TMS uses magnets and is primarily applied to treat depression. Neurofeedback employs feedback to help you learn to stimulate or change your brain. Neurofeedback can be applied to a wider variety of brain-based conditions (see more below).

TMS
TMS (also known as rTMS) stimulates a targeted part of your brain using high-powered magnets placed above your head. Its magnetic field can change brain activity. In the U.S., TMS has been cleared by the FDA as a treatment for major depression and for pain associated with certain migraine headaches. Some TMS machines have been approved as an adjunct treatment in adults with OCD. These clearances and approval don’t mean that TMS works consistently, but it’s increasingly popular with psychiatrists and other providers because it’s often well reimbursed by health insurance.

Most centers that provide TMS require treatment sessions every weekday for 20 to 40 visits. Those benefitting often need ongoing maintenance for the benefits to continue. Many centers also recommend the continued use of anti-depressant medications.

Neurofeedback
Neurofeedback uses technology that provides instant feedback to the brain. This feedback helps your brain change its neuronal firing pattern. In other words, the brain resets itself to function better.

Rather than stimulating the brain, as TMS does using magnets, neurofeedback employs feedback that helps you change your brain’s activity so that it operates with a more normal pattern. This approach is founded on the concept of neuroplasticity, the brain’s ability to change itself.

Insurance coverage is another way the two therapies differ. Because TMS has clearances and an acceptance from the FDA, it’s often covered by insurance. Insurance coverage for neurofeedback is not always covered. Many providers may be out of network, and reimbursement depends on the company, your particular plan, the codes chosen to submit, and whether your provider supports insurance filing.

So, which is better?

Mike Cohen has been looking carefully at TMS for a number of years. (Mike is Director of Neurotechnology at the Center for Brain Training). Below are his thoughts on answering this question:

The benefits of TMS

“I’ve been investigating TMS off and on for the past 10 years (and used neurofeedback for 25+ years). I’ve looked into the different types of TMS and TMS equipment. I’ve visited several TMS centers and referred patients for TMS. I’ve asked psychiatrists who referred patients for TMS about their experiences and have talked to my some of my clients who tried it. ”It turns out that TMS hasn’t lived up to its initial promise. Though it can work well for some people I had hoped we’d see a higher percentage of clients get clearly distinct benefits. My perception is that fewer than 50% of patients experience significant effects. Many require a lot of ongoing maintenance for them to hold, but some people do benefit.

“One psychiatrist I interviewed said she quit referring for TMS because too few of her patients did well.  TMS protocols used in the U.S. are minimal compared to how they’re used in some other countries.

“TMS has promise, but the technology and methods for targeting the training need to evolve. It would make sense to have a detailed brain map to identify where to target the TMS. That’s often how we use neurofeedback, but currently, that’s not the standard for TMS. TMS primarily targets the same spots on the head for everyone – without knowing if the individual’s needs really match up.”

The benefits of neurofeedback

Neurofeedback has several advantages over TMS:

For most people, and for the benefits outlined above, neurofeedback is often the better choice for many people. Ultimately, however, it is up to your physician to help you decide how to proceed.

Neurofeedback as TMS maintenance
As a side note, we’ve worked with several patients who responded well to TMS who used neurofeedback training for their maintenance rather than using TMS for maintenance. The results were better in some cases when neurofeedback was paired with improved nutrition, exercise, and other lifestyle changes.

1
Contact us, or a neurofeedback provider near you, for information about how neurofeedback may be able to help you.
2
Click here to watch a short video that explains how neurofeedback works.
3
For an even more in-depth understanding read Mike Cohen’s Amazon bestselling book Neurofeedback 101: Rewiring the Brain for ADHD, Anxiety, Depression and Beyond (without medication).