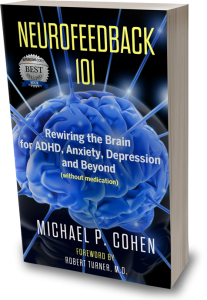 Note: Dr. Turner has been a neurologist for 30 years, specializing in epilepsy and neurological disorders in children and adults. He’s taught at major medical schools and conferences around the world. He explains his enthusiasm for neurofeedback as a valuable tool and why he feels this book is important.]

For many years I taught and practiced neurology with the same tools as other neurologists. These tools were comprised primarily of medications (pharmacotherapy) and, sometimes, surgical interventions. Conventional treatments rarely address the underlying causes of illness. Their effectiveness is often limited for many patients and can create unwanted side effects.

Over the years I gradually became disillusioned with the limited toolbox available for treating epilepsy and neurological disorders and began looking for something else. I’ve had a lifelong passion for clinical medicine and academic excellence and knew there had to be something better.

Beginning in 2010 I started extensively researching scientific and evidence-based literature about neurofeedback (EEG biofeedback). Even though it’s frequently dismissed by the medical community, the initial evidence compelled me to dig further.

I learned about the early seizure work of UCLA scientist and neurofeedback pioneer M. Barry Sterman Ph.D. His seminal research riveted my attention. His findings showed evidence that neurofeedback could reduce seizures in both animal and human models. I saw claims that neurofeedback could also improve other brain-related symptoms, including headaches/migraines, anxiety, concussions, depression, ADHD and more.

If it was real, I wanted to investigate it beyond just reviewing the research and literature. I met with clinicians and some of their clients and patients whose lives had been changed by neurofeedback.

I also went to neurofeedback courses and conferences. At one of those conferences, I met Mike Cohen after a presentation he gave. I found him engaging, , helpful and, above all, experienced and knowledgeable. We immediately clicked,

Eventually I took a leap of faith and pursued a six-month research and training sabbatical from my position at the medical center where I’d worked for 17 years. The end result—I left my academic position and opened a neurology practice specializing in neurodiagnostic testing (EEG and quantitative EEG analysis) and neurofeedback.

It was a bold move, because at the time I knew of only three neurologists and one neurosurgeon involved in neurofeedback. The risk, however, was worth it. Being able to offer neurofeedback, along with some other evidence-based complementary and alternative approaches, resulted in the lives of many of my patients being transformed in ways I’d never seen before. For the first time in my medical career I felt like a true health care provider instead of just a disease manager.

I was delighted when Mike asked me to write the foreword to this book. He’s respected as a provider and teacher throughout much of the neurofeedback community. It’s also a book that is needed.

When I read his manuscript, I remember wishing there’d been a book like Neurofeedback 101 when I started my research. It’s an excellent overview of how neurofeedback works and its impact. It’s an easy read—not too complicated nor oversimplified. I found the FAQ section superb, and the case histories corroborated over and over the experiences I’ve witnessed with my own patients.

I also thought it was important for readers to know that there are physicians “out there” who are supportive of neurofeedback. We work to harness what’s known as neuroplasticity to help our patients. Neuroplasticity is the brain’s lifelong ability to grow, change and heal.

Those of us who know what neurofeedback can do want as many people as possible to learn about it. This book is the perfect tool to achieve that end.

I frequently ask myself why, if neurofeedback has been around for decades and has an evidence-based foundation, isn’t it more mainstream. Why is it not being offered more broadly around the world? Mike tackles that question, and many more, in the book.

Unfortunately, many health professionals are unfamiliar with it. Some say that it doesn’t work, or it’s not evidence-based, or it’s experimental. Yet I know from years of dedicated study and clinical application that neurofeedback works.

Neurofeedback is an amazing healthcare intervention, and Mike’s book is a valuable overview for anyone who has a personal or professional interest in it.