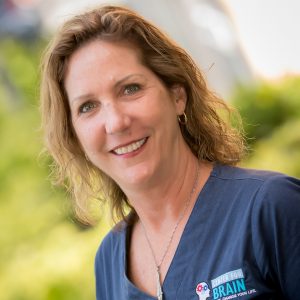 For many years Jayne suffered from chronic migraine headaches. When neurofeedback resulted in her headaches going away in 1992, Jayne “developed a passion” for the science and set about to learn all she could about it.

Over the years she earned certificates in biofeedback and advanced biofeedback, peak performance biofeedback training, hypnotherapy, and therapeutic crisis intervention.

Jayne worked alongside Dr. Mary Jo Sabo in the groundbreaking Yonkers Project, where neurofeedback was brought into the schools to train the most badly behaved children, most with ADHD.

In our practice Jayne applies her skills to all age groups but meshes particularly well with children and teens. Her playful nature puts them quickly at ease. Sincere interest in their lives and well-being is a hallmark of the rapport and trust she builds with them.

“I listen to them. I empathize with them. I find out what’s going on in their lives,” she said. “I’m real with them, but I keep it lighthearted. I get a little bit silly with the kids sometimes because I know they would much rather be somewhere else, and I want them to be comfortable.”

In her spare time Jayne enjoys long distance bicycling. She has completed several grueling charity rides, including the 165-mile Miami-to-Key-West SMART Ride, a ride from Boston to New York, and a 500-mile trip in Alaska.