How Mike Cohen Decided to Get into the Neurofeedback Field 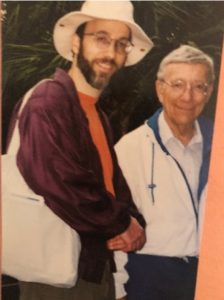 It all began with a family crisis.

In 1995, I was enjoying a successful career in the high-tech industry in Atlanta where I worked as a software consultant for very complex systems. While I was doing well, my father was not.

Untreatable depression
Suffering from a severe type of depression, he had been treated for years with medication, psychotherapy and dietary changes. He had even undergone shock treatments. Nothing we tried helped. To say his outlook was bleak would be an understatement: his condition was critical, with ZERO quality of life. He could not hold a conversation, read a book or watch TV because he spent all his time obsessing. I was very concerned for his future and for my mother’s emotional state because of all the stress my father’s situation put on her.

One fateful day
Then one fateful day I met a psychiatrist at a social gathering. I didn’t suspect at the time that meeting him would change the course of my life, my father’s life, and eventually the lives of many others who would become my clients, but it did.

This psychiatrist encouraged me to investigate neurofeedback. I had never heard of it. Although he suggested it could be effective in helping people with brain-based issues like depression and anxiety, I remained skeptical: if it was so good, why hadn’t I heard about it? (Little did I know I’d hear this question repeatedly once I became involved in the field).

Putting skepticism aside
Skepticism aside, I was desperate to find a solution for my dad. Since only limited research was on the internet at the time, I couldn’t just “Google it,” so I ordered research papers from the Emory University library. I also called a half-dozen psychologists and medical doctors around the country who were using neurofeedback. Those who took my calls assured me that it did, in fact, work. The concepts made sense to me and I wondered, “Could this help Dad?”

A surprising success
We had already tried everything else: what did we have to lose? Hopeful that this new technology could be the answer for my father, I located an experienced neurofeedback clinician two hours outside of Atlanta and six hours from my parents’ home in Tennessee. I arranged for my dad to undergo intensive neurofeedback training twice a day for ten days. On the sixth day, when I walked into his training room at the neurofeedback center, he looked up and said, “Hi, Mike. How are you doing?” That sure was different! Prior to that, my father couldn’t even engage in a simple exchange that most of us take for granted. Even better, this near-miraculous change in him occurred at remarkable speed.

I wondered how the heck neurofeedback could have helped him when the best doctors had failed to reach him and find a solution to his problems. Witnessing its positive impact on my father was enough to intrigue and motivate me.

By the way, my dad didn’t stay “fixed.” It took many more training sessions for him to get better and break out of his problem, but neurofeedback clearly made a significant impact in helping him regain a good part of his life until his death in 2010.

Discovering my passion
Impressed, I decided that this technology needed more visibility. I offered to help spread the word in my free time, on behalf of my dad’s neurofeedback provider.

It became my passion to inform as many people as possible about this technology. I started by organizing a lecture at Clemson University in South Carolina to present an alternative to medications for mental health issues. One-hundred twenty-five people showed up! I was shocked. Many attendees expressed their frustration with medications that either didn’t work or didn’t help enough

Crazy to leave high tech while it was really booming – or was it?
The response to the lecture prompted me to do something my family and friends thought of as sheer lunacy: I gave up my high-paying job in the technology field to dive into a new career in neurofeedback. I had seen enough to soothe my skeptical nature. In 1996 I opened a clinic in Atlanta with the neurofeedback practitioner who helped my dad.

Why did I take a chance on neurofeedback when I already had a thriving career? I realized there were countless people suffering who needed help and didn’t know about neurofeedback. (That remains true to this day). I thought I could help. That’s what motivates me to continue sharing this with as many people as possible.

Learning and teaching
During my first 18 months in the field I was able to take numerous neurofeedback courses. I worked out an arrangement to attend courses around the country by helping support and teach the technology to healthcare professionals. In those days, technology was more complex and a bigger obstacle to learning neurofeedback than it is today (though it’s still a factor). Since then, I’ve helped more than 2,500 clinicians learn neurofeedback and add it to their practices.

I’ve had the privilege of being educated by the best people in the field and with the help of advances in modern-day brain research. I’ve learned the most from teaching courses to clinicians, and from the clients at our center who share with me daily how their brain responds to neurofeedback. It’s through that feedback that I’ve learned more about how to adapt to each individual’s unique response to brain training.