Awakened with a start, 22-year-old Kaylee Korpi was swamped by a tidal wave of confusion.

Why were there five firemen in the bedroom at 6 a.m. sticking patches on her chest to run an EKG?

What was going on?

“They’re taking you to the hospital to find out what happened,” said her alarmed sister, who had awakened to Kylee having what was eventually identified as a seizure. How could that possibly be? Kaylee wondered through her fog. After all, she was perfectly healthy.

Little did she suspect that that bewildering day marked the first of thousands of disconcerting days to come: days comprised of a confusing web of doctors, medications, healers, and desperation; days aimed at getting a handle on seizures occurring with mounting frequency and intensity; days that ultimately led her to neurofeedback, what she would later declare the most effective relief of anything she had tried.

“After so many years, to discover something that actually worked was incredibly encouraging,” she said. 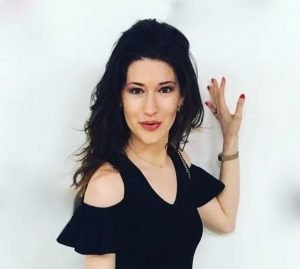 In April of 2015 life couldn’t have been better or more exciting for Kaylee. She had a serious boyfriend named Joel, was about to earn a degree from the Fashion Institute of Design and Technology in Los Angeles and start a career in costume design.

Wanting to keep an eye on her older sister who’d recently undergone major surgery, the two were temporarily sharing a bed in Kaylee’s sister’s home—an arrangement that would expose a shocking mystery.

In the wee hours of that frightful morning, Kaylee, who had no history of seizures, had experienced a grand mal seizure in her sleep, also known as a tonic-clonic seizure. Grand mal seizures cause a loss of consciousness and violent muscle contractions and are triggered by abnormal electrical activity in the brain. People who suffer a grand mal seizure typically have no memory of it.

Diagnosis: Epilepsy
After being treated in the emergency room, Kaylee met with a neurologist, who diagnosed epilepsy and suggested she start medication immediately.

Kaylee blew off the diagnosis, particularly uninterested in doing anything about it when the doctor told her the medication might make her less sharp. Besides, she had too much to do. Finish her degree. Complete an internship. “I was in denial,” she confessed.

Seizure frequency escalated
Kaylee settled back into normal life, got engaged to Joel, and nearly forgot about the incident until she suffered another grand mal seizure on Christmas Eve that year.

Giving in, taking medication
By the time Kaylee and Joel, now her husband, arrived in New York in March of 2016 for his job, it was clear Kaylee would be unable to work. In fact, it wasn’t safe for her to drive, nor could she cross the street or even take a bath without someone with her. 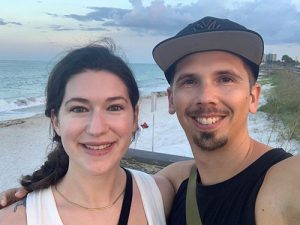 She saw one doctor in New York who ruled out a brain tumor and later another who identified the cause of her epilepsy: focal cortical dysplasia. (Focal cortical dysplasia is a congenital abnormality of brain development where the neurons in an area of the brain failed to migrate in the proper formation in utero). Faced with a diagnosis she couldn’t ignore, Kaylee agreed to take medication. 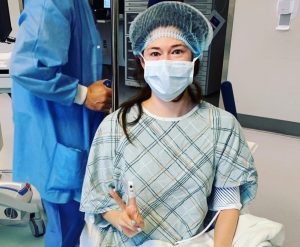 Uncomfortable with the disturbing side effects of the medication, including mood swings and unclear thinking, Kaylee sought other options. She tried acupuncture and cranial sacral therapy, but they didn’t help.

In September of 2020 she underwent two brain surgeries. They made her seizures worse. It was suggested she have a third brain surgery.

Home neurofeedback equipment
By then they had moved from New York to Florida.  They did research, found the Center for Brain Training, and drove four hours across Florida to meet with Mike Cohen, the Center’s director.

Kaylee had a new EEG recorded at our center. It was sent to an EEG expert who recommends neurofeedback training protocols for epilepsy patients. Based on that information, Mike was able to recommend the appropriate neurofeedback equipment for her and provide targeted training for her seizure activity.

30 percent reduction in seizure duration and intensity
Kaylee started using neurofeedback several times per week in October of 2021, with remote training and supervision provided by Pricila Vizcaino of the center.

There were other improvements, too. Before doing neurofeedback, Kaylee had four or five migraine headaches a week. She’s now experiencing only one per week, and it’s considerably less intense. 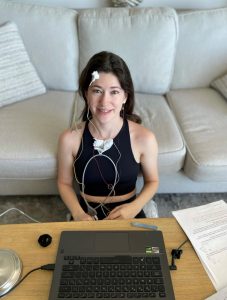 “One of the changes was feeling more focused.” said Kaylee, who has been able to go to work as a property manager. Another was that I was sleeping more deeply and longer. My attitude is ‘trying to do my best and letting God do the rest. It’s better to move forward rather than be stagnant.’”

Neurofeedback: a “blessing and a miracle”
She still takes three medications and has added medical marijuana to the mix, which she thinks has also helped diminish the seriousness of the eight-or-so daily petit mal seizures she continues to have. However, neurofeedback is what she credits with most of the improvements in her life.

“Neurofeedback has been a blessing and a miracle in my life,” Kaylee said.

“It’s helped me more than all those drugs. Neurofeedback doesn’t get nearly as much credit in the epilepsy community as it should. It could work for a lot of people if they knew about it.

“It was mind-blowing to discover how it could be this easy to deal with my seizures. Even small changes in someone like me is a pretty big deal. Neurofeedback is groundbreaking for the epilepsy community.”