Kavan’s story starts out like that of so many other autistic children. Normal birth. Healthy and happy for 18 months or so. Then language goes away. And eye contact ceases. And other unusual behaviors, like perfectly lining up toys, become a daily event.

Jill and Gordon, already parents of a normal son named Keelan, knew right away something was wrong and wasted no time getting Kavan’s devastating diagnosis. He was just 26-months-old. Their world quickly unraveled when Kavan’s behavior went from puzzling and frustrating to downright dangerous as he grew older, stronger, and more out of control.

As a young child Kavan, now 15, frequently banged his head on the floor. By the time he was eight, he had started throwing objects, hitting and kicking people, and hitting himself. He struck his fist so hard and repeatedly on his right temple that his retina detached, and he became blind in one eye. His bouts of aggression became unimaginably severe. It took two adults to restrain him until he could calm down. These bouts happened 30-40 times a day and could last from 10 minutes to an hour. The family built a padded calm room to protect him and those around him. It was exhausting for the entire family both physically and emotionally.

Jill often found herself flinching around Kavan, because she never knew when he would become aggressive and attack her.

One day the family, who lives in Wasilla, Alaska, was hiking near a glacier. Kavan became suddenly aggressive and chased Jill, fleeing away from him, hurling rocks at her.

Anything that remotely resembled normal life didn’t apply to this family. “We were under enormous stress,” said Jill. “I can’t begin to express how difficult it was living with a child like Kavan. As he got stronger, the danger got worse.”

A simple trip to the supermarket could end with Kavan having a meltdown, being restrained by Jill, and the police being called. She was sometimes accused in public of abusing him when she was holding him down to protect him. “The public doesn’t understand,” lamented Jill, “but how can they?

Jill was always vigilant for an “exit strategy” wherever they went. It’s a habit she still has today, although the picture of the life of this child and his family is considerably different. That change is thanks in large part to Jill’s discovery of neurofeedback, also known as “neurotherapy,” three years ago.

From Day One, Jill wasn’t content to sit around and let the State or the school system be her child’s sole savior, so as soon as Kavan was diagnosed she set about educating herself on autism treatments. She soon discovered Applied Behavior Analysis, or ABA. (ABA therapy is a system that provides a structured environment to help children with autism learn skills such as speaking).

She found an agency associated with a research project at the University of Alaska that trained ABA volunteers, and began recruiting people who would take the four-month course and work for free at her house with Kavan. Understandably, the turnover was tremendous. Not only was the job unpaid, but the duties were taxing. Jill constantly had to recruit new volunteers. And the version of the ABA program being implemented was, Jill eventually figured out, antiquated and ineffective. “After 14 months, Kavan had made little progress,” Jill recalled.

Determined to use evidence-based treatment, Jill discovered Autism Partnership in Seal Beach, California, which helped Jill implement an effective ABA program in her home. With the help of a desperate plea to Senator Ted Stevens, she managed to get Medicaid to pay for staff in her home for 40 hours a week. Because they were paid, they stayed longer, she said. And because they were trained in more modern ABA techniques, the therapy helped.

When he was five, Kavan started preschool in public school. His teachers received training from an Autism Partnership consultant to assist them in effectively teaching him. When his behavior got worse and his second grade teacher was accused of kicking him, the family decided to bring Kavan back home for schooling.

Jill set about re-building staff for the re-instituted home-based ABA program, which the school district agreed to pay for. “That took a long time because he was older, aggressive and not fun to work with,” Jill said. “I thought once we got the ABA program going again it would resolve the aggression problem. That was very naïve on my part. There was more going on than him being frustrated because of poor teaching in public school and a poor environment.”

“The Flip” and the Medication Non-Solution

That “more going on” had a terrifying component. Kavan’s outbursts were prompted two ways: by predictable external stimulus, such as being told “no.” The other involved a “flicker across his eyes” when, in a split second, he would go from being calm to being totally out of control. Jill calls this “the flip.”

Doctors prescribed numerous drugs to keep his behavior in check. One caused him to drool. Another resulted in him passing out. Others did nothing at all. Abilify calmed him for about six months but then stopped working. When Jill took him to UCLA’s neuropsychological center for a two-week in-patient evaluation, drugs were the only solution they offered.

The “Knight on the White Horse” – Hope at Last

At her wit’s end, Jill seriously contemplated putting Kavan in an institution. She was afraid he would accidentally kill himself or another person. As a last-ditch effort she took Kavan, then 11, to Dr. Adam Grove, a naturopath in Anchorage. Dr. Grove agreed that the “flips” weren’t a typical behavior associated with autism. When supplements he suggested didn’t work, Dr. Grove began exploring other options. That’s when he discovered neurofeedback and decided to get himself trained in it.

“He was the knight on the white horse that we so badly needed,” said Jill. “But was I skeptical? Absolutely! I had tried so many things at that point that hadn’t worked. But what I liked was the fact that neurotherapy had data behind it supporting its effectiveness with autism. I didn’t feel like the pharmaceutical companies had any data about their drugs and autism. I also liked that neurotherapy gathered data about the person’s condition before starting treatment, rather than doing it hit or miss like you do with medications.”

Brain Mapping and the Start of Neurotherapy (Neurofeedback)

The first order of business was to do a qEEG (quantitative EEG) on Kavan, which mapped the electrical activity in Kavan’s brain and indicated where the brain was working less efficiently or dysfunctionally. They had to wrap Kavan in a blanket (which he likes), and it took three sessions to complete the assessment, but they got it.

Once they did, Dr. Grove began targeting areas with the neurofeedback that he felt would bring the best results – and results they got.

“It didn’t take long,” Jill said. “We started noticing that his anger was diminishing, his outbursts were less frequent and they were much shorter in duration. His teachers reported that he began learning more quickly. His language started increasing. Neurotherapy stabilized Kavan when he was at his worst.”

Being the activist and advocate she is, Jill eventually got Medicaid to fund his treatments after showing that Kavan’s self-injurious behavior dropped 71% after his first 36 sessions of neurofeedback and another 47% after the second set of 36 sessions.

He’s now had about 150 sessions and is continuing with his treatments.

While certain problem behaviors persist, Kavan no longer hurts other people, and his outbursts went from 30-40 a day to one a month.

Today Jill takes him to the grocery store for regular shopping. He’ll fetch items she asks for and drop them in the cart. The family can now go to a movie, which he sits through, only making an occasional easily-hushed sound. He attends school in an ABA classroom and participates in track and swimming. He’s going to church and even singing along. “The first time he did that, I cried,” Jill said.

Jill says that today Kavan has outstanding trained staff who consistently teach and support him at home, school, and in the community.  She has stopped flinching in his presence and is even volunteering at a pregnancy crisis center.

“Now I feel a balanced life is possible,” she said. “In the beginning, my goal was for Kavan to recover, then I would go have a normal life. I finally realized that was never going to happen, that Kavan would always have significant issues, and the future was uncertain for him.

“Kavan has a future in an assisted living home rather than in an institution and will be able to handle supportive employment. I see a future for me separate from him.

“Before neurotherapy we were just existing,” Jill continued. “ABA is an effective method to teach Kavan, but neurotherapy makes him available to learn.  It was the key to changing Kavan’s life and making a more normal life possible for us all.

“I strongly believe that these discoveries, resources and the strength I needed to implement them were the way God answered my prayers and those of others who prayed for us. God provided for us every step of the journey and brought us through this horrible storm.” 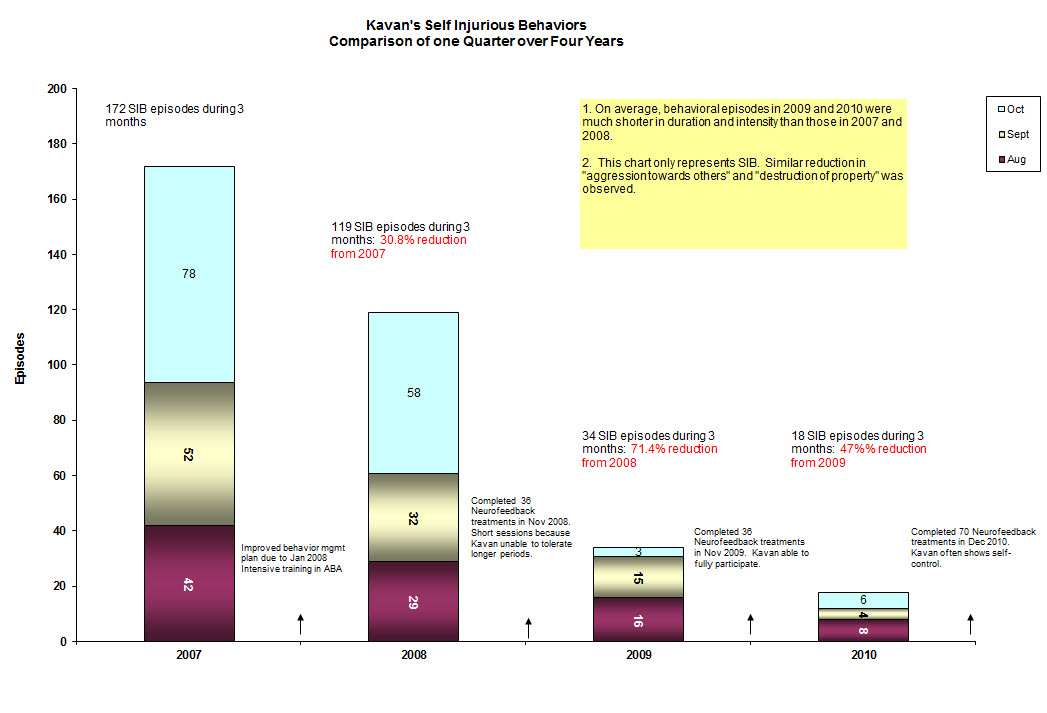