Geri made up her mind early on that her son Joey would be treated like every other child. Yes, he was autistic, but he had to learn to live in the “real world,” and she was going to make sure he knew how. Thanks to a lot of love, effort and two years of neurofeedback, that goal is becoming a reality.

Like so many other parents, Geri was caught off guard when her son, who had progressed normally for the first 18 months of his life, began exhibiting bizarre and distressing behaviors.

Linda’s heart nearly burst with joy as her eight-year-old son Trevor stood next to her, enthusiastically helping her dig a hole in the family garden. Earlier that day he’d been at school peacefully interacting with kids in his aftercare program, and that night he’d sit down to do his homework all by himself.

While on the surface these everyday activities appeared unremarkable, what was occurring felt nothing short of a miracle to Linda.

Almost since Trevor’s birth Linda and her husband John* of Palm Beach County, Florida had been in the struggle of their lives to save their precious son. From the time he was two-years-old, they suspected something was wrong with their only child but didn’t know what it was.

Kavan’s story starts out like that of so many other autistic children. Normal birth. Healthy and happy for 18 months or so. Then language goes away. And eye contact ceases. And other unusual behaviors, like perfectly lining up toys, become a daily event.

Jill and Gordon, already parents of a normal son named Keelan, knew right away something was wrong and wasted no time getting Kavan’s devastating diagnosis. He was just 26 months old. Their world quickly unraveled when Kavan’s behavior went from puzzling and frustrating to downright dangerous as he grew older, stronger and more out of control.

Since starting neurofeedback, the first thing the mom reported was that he became very “chatty” – though much of the speech initially was unintelligible or at just very limited words. As training has increased, he has become much more calm. He can sit still for much longer periods of time. He is continuing to speak more, in context, and in response to what is going on around him. His teachers report he is doing “awesome” in school, really paying attention, and learning better. 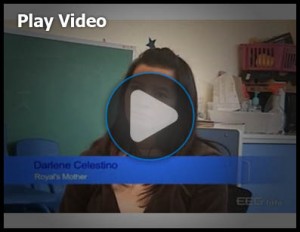 Interview with Darlene, his mom who was referred for neurofeedback by his Occupational Therapist. She reports “the benefits outweighed any other therapies we’ve done.” She reported that he’s become more relaxed and more verbal. He’s more social, interacting with others in ways she never thought he could do, and more conversational. Created by EEGinfo.

After 1 year of training with neurofeedback, here are some of the changes reported: